Kudumbashree, the Kerala State poverty eradication mission has started working since 1998 and addressing the three levels of empowerment of women in the states – Economic Empowerment, Social Empowerment and Women’s empowerment. Kudumbashree is essentially a community network of Neighborhood Groups and its federations that covers the entire State of Kerala. It consists of a three-tier structure with Neighborhood Groups (NHGs) as primary level units, Area Development Societies (ADS) at the ward level, and Community Development Societies (CDS) at the local government level. As on today the Kudumbashree network have 2,90,723 NHGs affiliated to 19,854 ADSs and 1064 CDSs with a total membership of 45,44,834 women. Kudumbashree membership is open to all adult women, limited to one membership per family.

Women play a vital role in the development and sustenance of society at large. On account of the traditional patriarchy followed since time immemorial, often their contribution is not accounted and valued. With the changing times, the status of women both in the oriental world as well as in the occidental world has changed. Along with equality, and empowerment, today’s woman has also to tackle new challenges and shoulder responsibilities manifold specifically in the context of developing nations. Unlike other poverty’s alleviation programmes, Kudumbashree has a multi-pronged design and strategies that empower women in socially, economically and politically. Further, the three-tier federated community structure adds to its authenticity, accountability and commitment towards the poor and marginalized. Kudumbashree recognizes that capacitating women to understand and exercise their rights is a basic requirement for the success and sustainability of any poverty eradication programme. Kudumbashree has attempted to bring every poor woman in the state to federations of NHGs and capacitate them to address the issues of women by enhancing or improving female work participation, health and nutritional status, participation in decision making, local governance and their role in planning in addition to make them as local entrepreneurs for finding their livelihoods.

Kudumbashree is further play an active role in bringing women in to local governance. The participation of Kudumbashree members in Gram Sabhas and development works of GPs providing them the space for involving in local governance. This participation is giving opportunity for them to involve as a community interface for local economic development lead by GPs in the areas of social infrastructure development, welfare programmes based on rights and entitlements, employment generation, from food security, health insurance, housing, enterprise development, MGNREGS and Jagratha Samiti for enduring the safety and protection of women. Convergence with Panchayat Raj Institutions (PRIs) has been one of the central themes within the Kudumbashree idea. Convergence means seamless working together of the Kudumbashree and the PRIs; it includes institutional and programmatic convergence as well as sharing of resources.

Major intervention done by Kudumbashree in last 5 years are:

1. Mahatma Gandhi National Rural Employment Guarantee Scheme (MGNREGS) added to the strengthening of ADS. ADS representatives were to be the ‘Mates’ for scheme implementation. Close to two lakh women were trained to work as ‘Mates’ in MGNREGS. This started emerging as a cadre developing knowledge on identification and estimation of works, and in work supervision. MGNREGS and its link with collective farming lead to the rejuvenation of the entire structure, and it benefited ADS the most.

2. Gender self-learning Programme : Kudumbashree devised a special project called the Gender Self Learning Programme (GSLP) that directly caters to women’s empowerment. The programme recognizes the necessity of understanding the importance of “self learning” and using it to take advantage of the innate potential of women. The GSLP reinterprets the concept of learning by positioning women in multiple roles such as participants, information providers and knowledge creators

Through Gender Resource Centre Kudumbashree emphasizes to address the women’s inequality manifests itself in many forms such as gender discrimination in terms of declining male-female sex ratio, Social stereotyping, Gender based violence, health and nutritional status, limited access to resources, etc. Also aims to work for holistic empowerment of women in the state cutting across sectors and to serve as a nodal agency for all gender related initiatives in the state and in the community. GRC attempts to develop and make available the resources at a single place to share them across organizations in order to make their efforts in the sector more streamlined, efficient and effective. It can be act as a centre for making Poverty free Panchayaths in Kerala through various interventions.

Women’s role, in a wide range of traditions and in theoretical work influenced by them, has typically been associated with the “private” realm, and men’s role with the “public” realm. The public/private distinction has been thoroughly criticized as being in many ways misleading and untenable. Nonetheless, it continues to influence both theoretical and empirical work, with the result that women’s efforts to gain a voice in governance have often been ignored. However Kudumbashree made it successful since two decade. Women in Kerala are has started thinking out of box. For this reason, the academic study of women, which used to take place in programs and departments of “Women’s Studies,” now increasingly, takes place in programs and departments of “Gender Studies,” dedicated to understanding the entire system through which societies constructed. It highlights the significance of starting Gender resource centers for enhancing the activities that focuses on gender equality in all the sections of the society.

Resource centers can be helping Grama Panchayat to formulate Projects and Programmes under Women Component Plan. It can be act as a nodal point for the support of survivors of violence or exploitation and also the center can take initiative in strengthening and supporting Jagratha Samithi at LSGs. It can develop a team of Gender Resource Group as technical team at the Panchayat level for the project formation, handholding support to the survivors and also as a facilitating team of different activities.. Through the interventions Kudumbashree aims to increase the participation of women in local development and governance.

To organize and implement programs and projects to address gender issues and to build gender equality in governance by promoting leadership, decision making abilities and challenging power relations 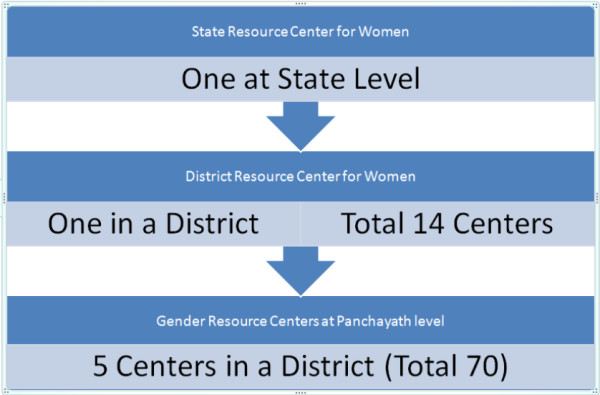 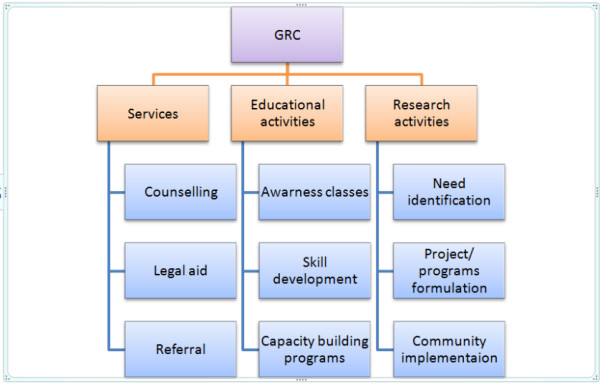 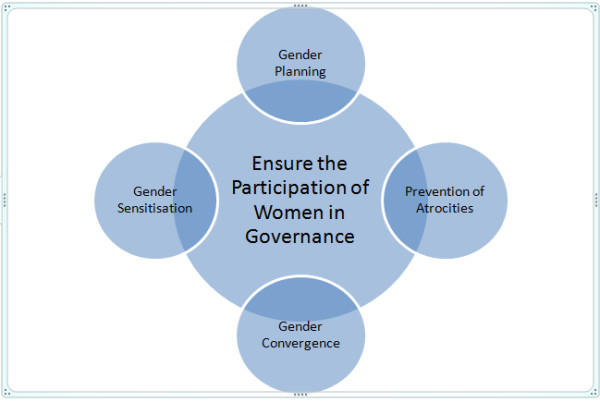 Roles and Responsibilities of the Centre at Panchayath 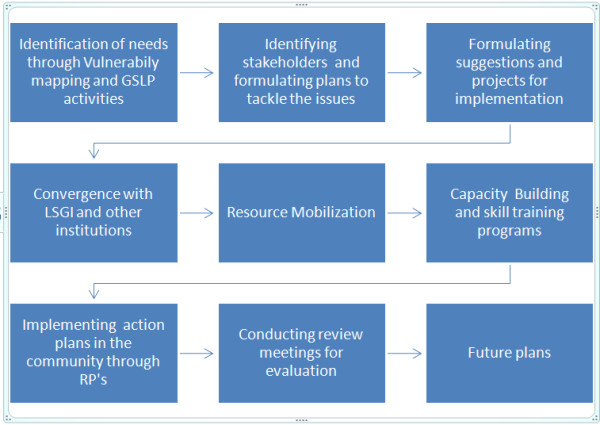 The District Centers will maintain close link with panchayat and also promote interaction with the community groups, which are working at the panchayat level. In order to achieve the same, these centers will identify field for acting as resource centers and activity centers. It is expected that the Gender Resource Centers will be able to draw upon the resources of all the categories of women who have a potential to contribute to the overall development of the economy. Women will be encouraged to set up enterprise though Neighborhood group/self help groups. Interaction between the all community groups will be the focal point of development of the Gender Resource Centers so that all the groups over a period of time are able to contribute each other’s development and at the same time achieve the overall objective of women’s empowerment. Centre wise action plan for interaction of these Women groups and development in a phased manner will be worked out in close cooperation with the state resource center.

Centers at three levels can be converge with LSGs, Departments like health, education, Social Justice, agriculture, NHM, KELSA etc. Programmes, funds and functions can be converging to ensure the participation of women in governance.