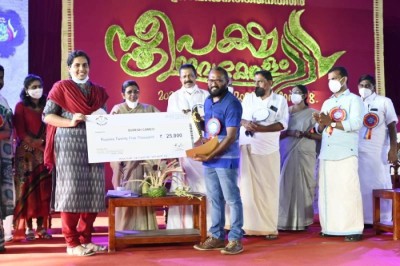 The prizes for the winners of 'Kudumbashree Oru Nerchithram’ Photography Competition Season 4 were distributed. Ms. Arya Rajendran, Mayor, Thiruvananthapuram Corporation handed over the prizes to the winners who came in the first three places during the Inaugural Session of the 'Sthreepaksha Navakeralam' Gender Campaign held at Nishagandhi Auditorium, Kanakakkunnu, Thiruvananthapuram on 18 December 2021.  Shri. V. K Prasanth, MLA, Vattiyoorkavu Constituency handed over the prizes to the consolation prize winners.

The Photography Competition is organized realizing the fact that the best photographs depicting the hard work of Kudumbashree members would further boost the women empowerment process. The fourth season of the competition was held from 22 July 2021 to 15 September 2021. Good quality photographs portraying the strength of Kudumbashree, functioning focusing on women empowerment is considered for the ‘Kudumbashree Oru Nerchithram’ Photography Competition, which is being conducted from 2017 onwards. Like the first three seasons, the fourth season had also received good responses.

The first season of ‘Kudumbashree oru Nerchithram’ was conducted during November- December 2017, the second season during February -March 2019 and the third season was held during January- February 2020. The three seasons of 'Kudumbashree Oru Nerchithram' Photography Competition had resulted in a huge success. Good quality photographs portraying the strength of Kudumbashree, functioning focusing on women empowerment is considered for the ‘Kudumbashree Oru Nerchithram’ Photography Competition. Kudumbashree Mission which envisions eradicating poverty through women in Kerala had successfully completed 23 revolutionary years. 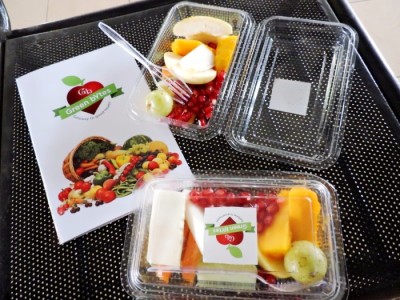 Marketing ‘healthy food habits’ among people in the form of salad bowls, diet bowls & fresh cut vegetables thereby developing healthy eating habits among public and generating revenue for women is one of the intervention of Kudumbashree in micro enterprises. The intervention which is coined as ‘Green Bytes’ is started in Government Secretariat where fresh cut vegetables, salads & fruit bowls are sold. The counter also offers fruit salads. The Mission focuses on serving the requirements of persons having health issues like lifestyle diseases by marketing diet bowls and healthy drinks like amla, carrot, lime & other fruits mixed with honey, ginger etc. The calorific & nutritious value of each bowl will be provided. As it markets fresh cut vegetables for easy cooking the women employees will be benefited and assessing the scope of the intervention, the Mission will start similar outlets in various part of the city and will extend it to other districts. 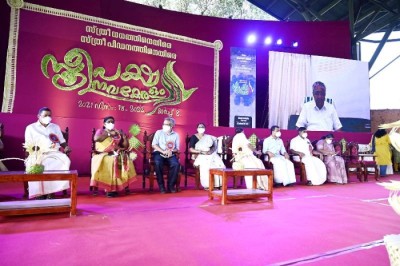 Shri. Pinarayi Vijayan, Chief Minister of Kerala inaugurated the 'Sthreepaksha Navakeralam' Gender Campaign which is being organized by Kudumbashree at Nishagandhi Auditorium, Kanakakunnu, Thiruvananthapuram on 18 November 2021. The campaign aim at equipping the society to nurture social attitude against dowry, violence towards women and resist the same. Shri. M. V Govindan Master, Minister, Local Self Government Department and Excise, Government of Kerala presided over the function. Through 'Sthreepaksha Navakeralam' Campaign, it is envisaged to take the awareness messages against dowry and violence towards women to all sectors of the society and thereby bring in a mind shift among the society and the general public.

Various cultural programmes were also organized prior to the function in connection with the concept of 'Sthreepaksha Navakeralam'. Along with the State Level Inauguration, District Level, LSGD Level and Ward Level Meetings were organized and everyone took the pledge of 'Sthreepaksha Navakeralam'. The first phase of the Campaign would be held from 18 December 2021 to 8 March 2022. During the first week of the campaign, discussions would be held on the topic, 'Dowry & Violence' at 3 lakh Neighborhood Groups (NHGs) and 19,542 Auxiliary Groups across the state. Various activities such as Poster Campaign, Social Media Challenge, Wall Painting Campaigns, Webinars ensuring the participation of College Students etc would be organized in the following weeks. After the first phase, the follow up activities would also be conducted. 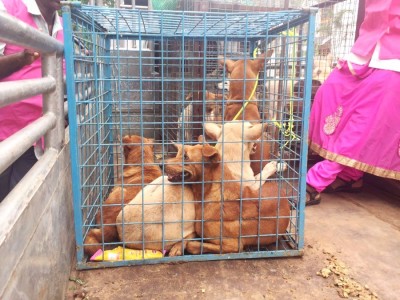 Kudumbashree has the history of assisting the governance machinery to solve problems. One of the key social problems faced by Kerala is the street dog menace. There were even instances where street dogs bit and killed men. In order to curb the street dog menace, approved methodology is Animal Birth Control, where in street dogs are caught, and they are dropped back to the original locality after doing the Animal Birth Control surgery (ABC). Surgery is performed by registered medical practitioners in institutions. Kudumbashree’s ABC project aims at creating Block Management Units of women who will catch dogs (using various techniques, the most popular being ‘cage trap’) and will take them to veterinary hospital for doing surgery. After the surgery, post operative care will be provided by the Kudumbashree ABC team, and the dogs will be dropped back to the place from where they are caught after a period of two days. As per a latest Government Order, the amount to be given by each Panchayat to the ABC team is Rs. 2,100/- per dog for the entire process. Till now (10/7/17), 500 dogs are caught in the state and 72 units are trained in various districts 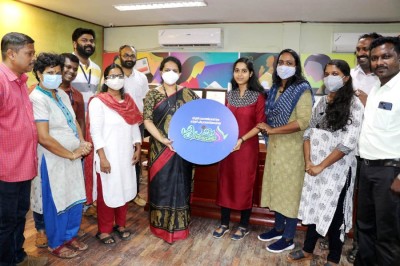 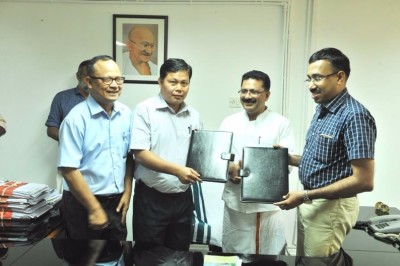 Kudumbashree is a National Resource Organisation with a mandate of assisting other states to start ‘Kudumbashree model’. At present, Memorandum of Understanding has been signed with 12 states and 1 union territory. Once MoU is signed, Kudumbashree mentors (experienced women from the community, who will work as master trainers) will be appointed in these states (in selected blocks/ panchayats) who will select community cadre from the state and will impart training and build their capacity. Mentors work in two domains. One is development of Micro Enterprises; and the other is convergence project of Community Based Organisation with Panchayat Raj Institutions (PRI CBO convergence). Assam was one of the first states that signed an MoU with Kudumbashree. Initial MoU was for a period of 3 years, and the project was implemented successfully. As a result of this, Assam State Livelihood Mission requested for another MoU for extending the project to 50 new Panchayats from 2017, and this new MoU was signed in the presence of Hon. Minister

Making a difference for Transgenders Updated On 2017-07-01 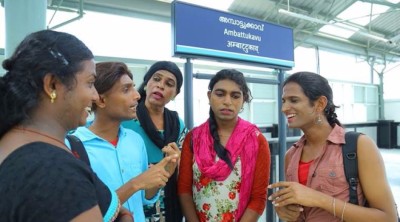 For the first time in the history of public transport system in the work, transgenders were given employment opportunities readily. 23 transgenders were selected and they were appointed for various positions (supervisor/ team leader/ cleaning staff/ ticket operator/ customer facilitation staff etc) in Kochi Metro. In the agreement with Kochi Metro for running Facility Management Centre, it was specifically mentioned that transgenders will be trained by selected, trained and will be posted in Kochin Metro through Kudumbashree network. This project aims at providing an employment opportunity for transgenders who are otherwise not generally employed in similar sectors. As a part of “Disha” campaign (a campaign run by Kudumbashree in November 2016 to strengthen the neighbourhood groups), transgender special NHGs were formed and training for self employment was given to some of them. This is the wage employment opportunity for transgenders, created specifically due to request from KMRL. This initiative will help in mainstreaming and in assisting transgender community. 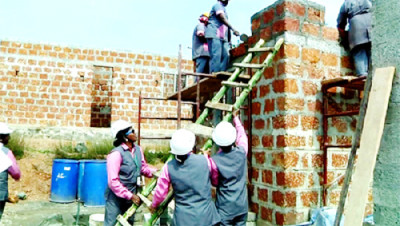 Women Construction Units envisaged by Kudumbashree is selected as one of the ‘Best Practices’ of Pradhan Mantra Awas Yojana (PMAY) implemented by Government of India through Ministry of Housing and Urban Poverty Alleviation (MoHUPA). Executive Director, S.Harikishore, IAS presented the best practice during the National Workshop held in Vijnan Bhavan, Delhi on 23/06//2017. Two states were invited for presenting their best practices related to urban poverty alleviation It is expected that more than 3 lakh dwelling units will be constructed in Kerala during the next three years (as a part of PMAY and LIFE mission of Government of Kerala) Forming construction groups of women will provide affordable solutions to rural poor for construction of their houses and will eliminate exploitation by contractors. Also, rural women will get higher income as they are doing skilled work (construction of houses). At present, training is given to 400 women, and Kudumbashree is envisaging construction groups in every development block and in every municipality. 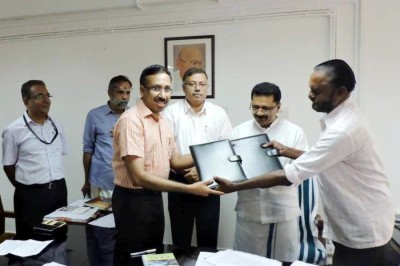 A tripartite agreement was signed between Jan Oushadhi, Local Self Government Department and Kudumbashree for starting Jan Oushadhi medical stores in each Panchayat or wherever feasible. Its a convergence project of local self government department and Kudumbashree. Panchayat will find out a suitable building and will give it to Kudumbashree units for running the pharma store. Kudumbashree units will have to employ a pharmacist and a computer operator to run the store. More than 450 varieties of medicines will be supplied by Jan Oushadhi. As an initial assistance, Rs. 1.5 lakh will be given to the Kudumbashree entrepreneur as capital subsidy for purchase of computers and for procurement of furniture. Further, medicines worth Rs. 1.0 lakh will be given free of cost (on credit). Using sales of these medicine, new medicines may be purchased as per requirement. At present, there is demand to start such stores in 34 Panchayats, and we are expecting demand from more places in near future. 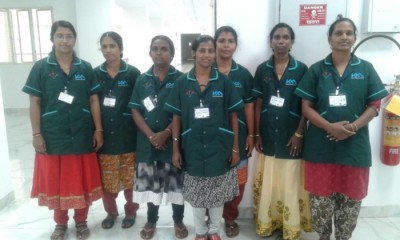 It was a prestigious moment for Kudumbashree when Hon. Prime Minister inaugurated Kochi Metro in June 2017. The reason for pride arose from the fact that for the first time in history, an ‘all women metro’ was inaugurated and Kudumbashree got the opportunity to do the facility management services for Kochi metro. As per the agreement with Kochi Metro, all services ranging from parking management to customer facilitation, from ticketing to housekeeping are entrusted with Kudumbashree. Total demand was for 780 staff. In this first phase 530 women are selected and they are serving Kochi Metro now. When 5 more new metro stations will be commissioned by September, Kudumbashree will provide 250 more staff. The present ‘women metro team’ are selected through a rigorous process. More than 40,000 candidates appeared for the written exam, and of them 1,077 were called for a personal interview. Kudumbashree members or their families only were allowed to participate. Yes, when Metro grows, opportunities for poor women also enhances.