Kudumbashree has been extending support to the Sapthavarna unit started in 2011 and Penpolika unit started in 2014. Kudumbashree Kannur District Mission had extended them relentless support when they lost the musical instruments during the unprecedented floods of 2018. The members of the Art Group led by Nanchiyamma, the recipient of the National Film Award for the Best Playback Singer had taken part in the Republic day Tableau. Ms. Pushpa, Ms. Vijaya, Tribal Animators of Kudumbashree Attappady Special Project. Ms. B Shobha, Ms. U. K Shakuntala, Ms. B Rani, Ms. B Sarojini, Ms. L Rekha and Ms. Gauri performed the Irula Dance.  Kudumbashree had marked their strong presence in the 74th Republic Day Celebrations of the country. 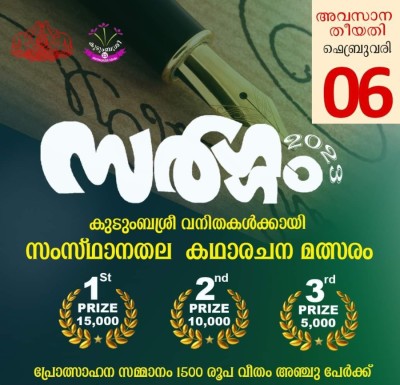 The date for submitting entries for 'Sargam-2023' the State Level Story Writing Competition for Kudumbashree women is extended till 6 February 2023.  The stories along with the author's name, address, phone number and a certificate of CDS Chairperson proving membership of Kudumbashree should be made available by post or courier. 'Sargam 2023- Story Writing Competition' should be written on the outside of the cover. The last date for receiving the entries in 6 February 2023.

The entries may be send to the following address : The Executive Director, Kudumbashree State Poverty Eradication Mission, Trida Building-2nd Floor, Medical College P.O.,Thiruvananthapuram-695 011. The entries sent through e-mail and WhatsApp will not be considered for the competition. For more information about the competition, visit : www.kudumbashree.org/sargam2023.

The enthusiasm and energy obtained from 'Chuvad 2023' NHG Gathering should be used to increase Entrepreneurial Ability: LSGD Minister Updated On 2023-01-28 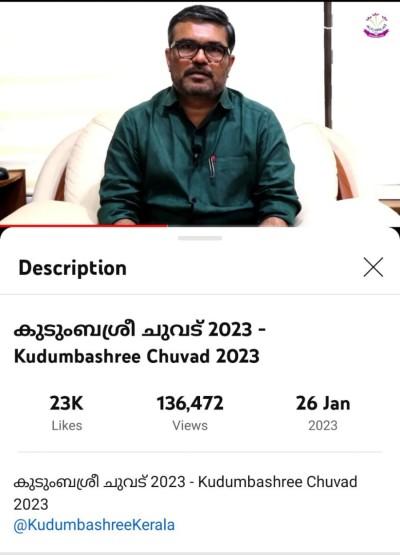 In the fourteenth Five Year Plan, the Government gave special focus on Local Economic Development and on creating job opportunities based on that.  In addition to the existing NHG members and the newly formed Auxiliary group members should be able to maximize the potential of job entrepreneurship as a system of mobilizing around 50 lakh women. From now, efforts to create business enterprise models based on innovative ideas should emerge from NHGs. Each NHGs should be able to start at least one enterprise within the next one year. Kudumbashree NHGs should maintain a healthy competition in that case. The Minister said.

More importance should be given to activities that would help in increasing the income from poverty eradication activities. As Socially Relevant Enterprises, Martial Art Training Groups are being started under the leadership of Kudumbashree.  Kudumbashree should be able to fight back social evils such as addiction and dowry. Kudumbashree could play a great role in realizing the dream of setting up a poverty free state. The Minister added. He also appreciated every woman who took part in 'Chuvad 2023' NHG Gathering. 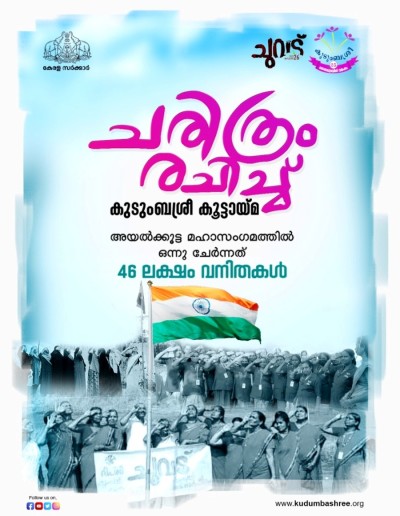 In most of the places, the stages were decorated using bio-degradable properties following the green protocol. Members started coming to the NHGs from morning itself as per the prior instructions given. 46 lakh women joined together under Kudumbashree which has won national and international acclaim for being the largest association of women in Asia. National flags were hoisted in 3 lakh NHGs in the state at 8 AM itself and every NHG sang the 'Sangamam' song written and tuned by themselves. together.  Following that they listened to the message of the Minister of Local Self Government Department, Government of Kerala through the official YouTube Channel of Kudumbashree.

The discussion mainly held at the NHG level were the changes brought in by Kudumbashree in the lives of NHG members and in the society based on the experience of 25 years. It was notable that new suggestions came forward from the NHGs to formulate and implement new project activities as per the need of the new era. Also. discussions were held on the topics such as health, hygiene, cleans neighborhoods, developmental needs of NHG families and localities and reports were prepared. 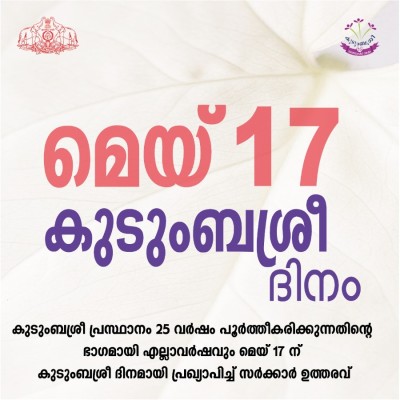 The government's new announcement will add momentum to the NHG meeting programs organized in all the three lakh NHGs of the state on 26 January 2023, starting with the Silver Jubilee celebrations. Kudumbashree is preparing to transform the NHG meeting into a strong step of the women's community in which 46 lakh Kudumbashree women participate at the same time with various programmes. 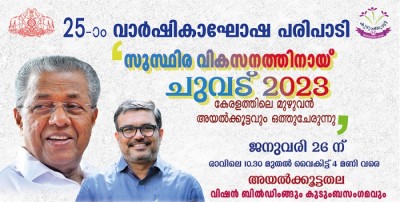 As part of the Silver Jubilee celebrations, all the three lakh NHGs in the state are organizing a community gathering called 'Chuvad 2023' on 26 January 2023. 46 lakh Kudumbashree women who are members of NHGs, their family members, Auxiliary group members, Balasabha members, elderly NHG members and special NHG members will participate in this gathering. Based on twenty-five years of working experience, the changes brought about by Kudumbashree in the lives of the NHG family members and the general public, health, public cleanliness, clean NHG environment, development needs of the NHG families and the area will be discussed on the 'Ayalkkootta Sangamam Day' under the leadership of the NHG members. Then the NHG groups will prepare a micro-level plan keeping in mind the sustainable development goals and submit the report to the ADS (Area Development Society).

Kudumbashree initiates various programmes starting on 26 January 2023 and ending on 17 May 2023. The national flag will be hoisted at 8 AM in all NHGs of the state on 26 January 2023 as part of the 'Ayalkkootta Sangamam'. Then the 'Ayalkkootta Sangamam' song will be performed. After that, the members will watch the 'Ayalkkootta Sangamam' message together through the Kudumbashree YouTube channel. After this, discussions focusing on various topics will be organized. It is aimed to turn the NHG gathering into a starting point for enabling the Kudumbashree system to achieve sustainable development goals including infrastructure development, better income-generating livelihood activities, health, education and quality of life.

Celebrating the Silver Jubilee celebrations together in all the NHGs and informing the whole state about the same, and ensuring awareness that public spaces also belong to women and are a space for their social and cultural expression are the main objectives of 'Chuvad 2023'. The participation of prominent personalities in the fields of art, literature and culture will also be ensured to make the community gathering attractive. Various art programmes will also be staged.

NHGs have been instructed to include 'Chuvad 2023' as a special agenda in the NHG meeting to be held on 26 January 2023 and to make prior arrangements. At present training programmes and campaign activities are being organized at district, CDS, ADS and NHG level on various dates. The same will be completed on 22 January 2023. 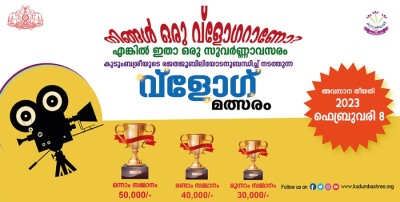 Kudumbashree is extending a golden opportunity for the public to take part in the vlog, reels competition in connection with the Kudumbashree Silver Jubilee Celebrations and to win exciting prizes. Vlogs, reels on any projects, activities, initiatives of Kudumbashree will be considered for the competition. Last date for submitting the entries is 8 February 2023.

The videos selected by the primary jury will be uploaded on the official YouTube, Facebook and Instagram of Kudumbashree State Mission. 30 percent weightage will be given to views. The winners will be determined based on concept, content, videography and views weightage.

To know more details including the conditions, visit - www.kudumbashree.org/reels2023 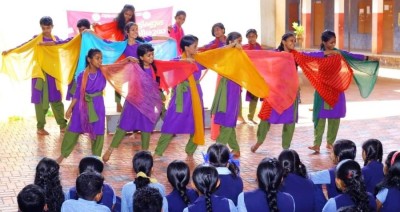 Kudumbashree Kannur District Mission's 'Kuttykkoottam' organized cultural procession against drug addiction. The members of Balasabha in Kannur have indeed won the applause of their peers through the cultural procession organized to convey the awareness message that they should not perish under the influence of alcohol and should not become a victim of the terrible calamity that destroys the future of a nation by eating up generations.

21 Balasabha members selected from various Kudumbashree CDSs of the district had lined up in the procession. The Cultural Procession which started from LP School, Naduvanad, Iritty on 29 December 2022 was concluded at the New Bus Stand, Thalassery on 15 January 2022. Within 7 days ( 29, 30, 31 December 2022 and 7, 8, 14, 15 January 2023), they performed at 19 different locations in the district such as Aralam, Kolayad, Koothuparamba Municipality, Mathil GHSS, Kannadiparamba Deshaseva UP School. Art programs were presented in 19 centers of the district such as schools.

The main programmes of the cultural procession include music programme by Dr. Prashanth Krishnan, drama by Surendran Aduthila and presentation song composed by Balasabha children. The presentation song was sung by Ms. Sajini, Chairperson, Padyam CDS. Shri. V.K. Kunjikrishnan Master and Shri. Ravi Ezhome, Theatre workers jointly put together the cultural procession and brought it to the stage. Kudumbashree Kannur district team have indeed taken up the great task of creating awareness against drug addiction.

Kudumbashree Pathanamthitta District Mission organized torch relay as part of 'Nayi Chethana' Gender Campaign during 21 to 23 December 2022. The 'Nayi Chethana' Gender Campaign was conducted under the auspices of the National Rural Livelihood Mission. NHG members, general public and Balasabha members  took part in the procession. The torch relay was organized associating with the District Sports Council.

Shri. Chittayam Gopakumar, Deputy Speaker, Kerala Legislative Assembly inaugurated the torch relay during the function held at SNDP Hall, Adoor on 21 December 2022.  Ms. Divya Reji, Vice Chairperson, Adoor Municipality presided over the function. The torch relay passed through the main 34 areas of the district namely Adoor, Pandalam, Aranmula, Malayalapuzha, Konni, Kodumon, Kozhanchery, Thiruvalla, Mallapally, Ranni Pazhavangadi, Chittar and Vadasserikkara and ended at Pathanamthitta on 23 December 2022. All participants were given certificates and plaques for the march which was concluded with a night walk and pledge. 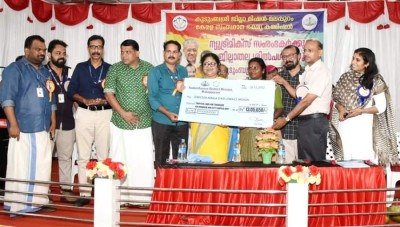 Kudumbashree Malappuram District Mission is extending a golden ray of hope to the NHG members who were unable to complete their education due to various reasons, through 'Yogya', the literacy programme. A total of 1065 NHG members have registered to appear for the 10th and 12th exams during March 2023. Out of these, the examination fee for 731 candidates was found by Kudumbashree Malappuram District Mission through CDS own funds and sponsorship. This amount of Rs. 13,05,650  was handed over to Kerala State Literacy Mission by Prof. R Bindu, Minister of Higher Education, Government of Kerala at the function held at Municipal Bus Stand Hall, Malappuram on 26 December 2022.

Kudumbashree Malappuram District Mission has also submitted a 'Yogya' proposal to the Kerala State Literacy Mission to provide non-formal education to all NHG members below the age of 35 years to write the 10th and 12th Equivalency Examinations.