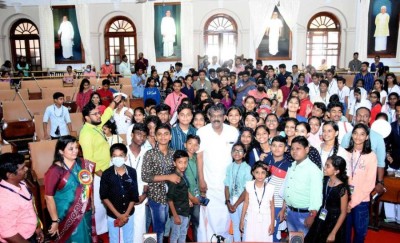 The State Level Bala Parliament held for Balasabha members under the auspices of Kudumbashree had set a noteworthy representation. Adv. Antony Raju, Minister for Transport, Government of Kerala inaugurated the State Level Bala Parliament held at the Old Legislative Assembly Hall, Thiruvananthapuram on 5 September 2022. The Minister said that children should gain strength to overcome crises through democratic activities.

Education means the the comprehensive development of an individual in a way that he can have social commitment and sense of responsibility along with the knowledge acquired in various fields. Kudumbashree's Bala Parliament is a project that helps to gain knowledge in all fields. The Bala Parliament trainings provided in relation to the democratic system, including the legislature and parliament, will help to develop high democratic values, leadership qualities, organizational skills and environmental awareness in children. The Minister said. He also added that the strength to face and survive failures should be acquired at an early age and wished that the participants in the Bala Parliament would be able to enter the Legislative Assembly in the future.

The Bala Parliament held after the inauguration session also witnessed the President's Policy Announcement, Question and Answer Session on various areas such as health, education, livelihood, women's safety, increasing drug use among students, presentation of emergency resolution and walkout of the opposition members. 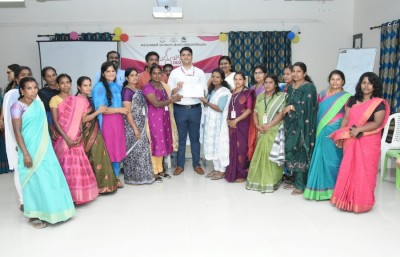 'Chuvad 2022', the state level residential training programme for Kudumbashree CDS Chairpersons has been concluded at Agricultural Co-operative Staff Training Institute, Manvila, Thiruvananthapuram on 2 September 2022. Shri. Jafar Malik IAS, Executive Director, Kudumbashree gave away the certificates for the CDS Chairpersons and Training teams during the valedictory function. Smt. Hemalatha C.K, Additional Private Secretary to the Minister of Local Self Government Department and Excise Department, Government of Kerala presided over the function.

With effective planning and organization, 'Chuvad 2022' organized under the leadership of Kudumbashree has turned out to be the most comprehensive training programme ever given to CDS Chairpersons. Smt. Sarada Muraleedharan IAS, Additional Chief Secretary, Local Self-Government Department and Smt. P.I. Sreevidya IAS, Former Executive Director, Kudumbashree gave leadership to the selection and formulation of training topics which helped in achieving a more professional approach to the programme. Also, officials of Kudumbashree National Resource Organization, Kudumbashree State Mission and training group members participated.

Behind the success of a one and a half month long training programme was the determination of Kudumbashree along with the continuous efforts of around sixty members from the training groups. Those who came from distant districts with their babies for training were were supported by their love. From taking over the day care of the children, they have been supervising and coordinating the matters including the accommodation and food of the camp visitors. Dr. Myna Umaiban, Public Relations Officer, Kudumbashree welcomed the gathering and Shri. Nishad C.C, State Programme Manager, delivered the vote of thanks. 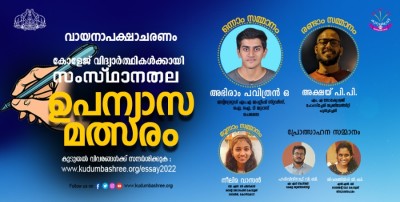 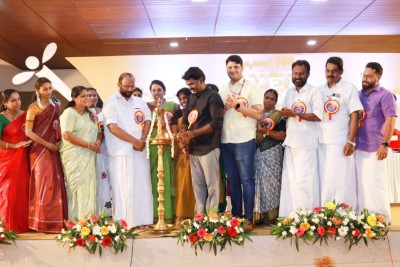 Kudumbashree has set up a sustainable entrepreneurship project in the state to make Kudumbashree women, employers from self employment. The Special Livelihood package is launched as the second phase of the Start Up Village Enterprises (SVEP) scheme, which was launched by the Government of India. The SVEP Scheme aimed at the poverty alleviation in the rural areas will lead to the creation of new employment opportunities at the local level and thereby pave the way for regional economic exchange. Shri. P.V. Sreenijin, MLA inaugurated the state level plan to develop the MEC group in view of the local potential of the state in the other 13 blocks of the state, at Kolenchery, Ernakulam on 27 August 2022.

Shri. Jafar Malik IAS, Executive Director, Kudumbashree welcomed the gathering. Shri. Ullas Thomas, President, District Panchayath presided over the function. Ms. Rama Santhosh, Member, Governing Body, Kudumbashree launched the logo of Sevika Garments, which was launched as part of the livelihood package. For the first time in Kerala under the leadership of Kudumbashree, SVEP was implemented as a pilot project in Vadavucode block of Ernakulam district and Parakkode block of Pathanamthitta district, during the financial year 2017. A total of 2129 enterprises that produce value added products were set up in Vadavucode block during this period.

Apart from providing banana chips and sarkaravaratti to the onam kit prepared by Supplyco, Kudumbashree members are now busy cultivating various types of  flowers all across the state for this onam season. Kudumbashree has also been organizing onam marketing fairs by providing vegetables and various other products. 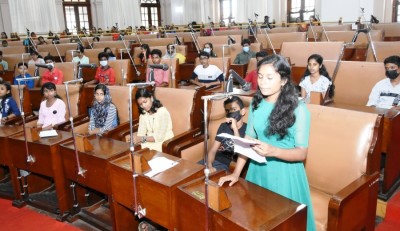 District Level Bala Parliament Sessions are progressing in the state with strong debates, expert answers and topic based discussions. The issues such as the travel woes faced by school students, child rights issues and the suffering and starvation of marginalized people are all topics of discussion at the Bala Parliament sessions being held in the districts. The opposition come up with whip-like questions and the administration avoids controversies with expert answers. The Bala Parliament held in various districts of the state during the past two weeks were literally eventful.

Bala Parliament is implemented to make Kudumbashree Balasabha members understand the importance and scope of democratic system. Currently, 3.95 lakh children are members of 28,000 Balasabha in the state. it also aims at creating awareness on various issues like parliamentary procedures, administrative systems, law making and constitutional value.

Bala Panchayaths are organized at the local body level, consisting of selected children who are members of Balasabha under each Local Self Government Institution. District Parliaments are held at the district level, consisting of one member elected from the Bala Panchayats of each district. Ten children (five girls and five boys each) selected from the district parliaments of each district participate in the State Level Bala parliament. The rights of children from different backgrounds and the challenges they face are discussed and documented through these mechanisms. 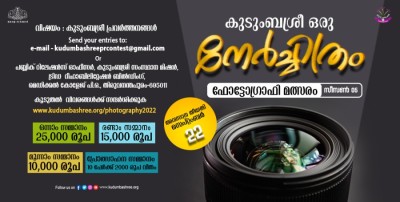 Entries may be sent to the mail id, kudumbashreeprcontest@gmail.com or may be sent in CD Format or as hardcopies to the address, The Public Relations Officer, Kudumbashree State Mission Office, Trida Building, Medical college P.O, Thiruvananthapuram-695011. The name, address, mail id and contact number should be mentioned along with. A short note on the photograph should be attached along with. The photographs should not contain any watermarks. The entries should be transcribed as 'Kudumbashree Oru Nerchithram Photography Competition'. More details of the notification is available in the link : www.kudumbashree.org/photography2022.

The first season of ‘Kudumbashree or Nerchithram’ was  conducted during November- December 2017, the second season during February -March 2019, the third season was held during January- February 2020 and  The fourth season of the competition was held from July to September 2021. The four seasons of 'Kudumbashree Oru Nerchithram' Photography Competition resulted in a huge success. Good quality photographs portraying the strength of Kudumbashree, functioning focusing on women empowerment is considered for the ‘Kudumbashree Oru Nerchithram’ Photography Competition, which is being conducted from 2017 onwards. Kudumbashree Mission which envisions eradicating poverty through women in Kerala had successfully completed 24 revolutionary years and has entered into its silver jubilee year.

Kudumbashree to supply 61.19 lakh packets of Banana Chips and Sarkaravaratti to the Onam Kit distributed by Supplyco Updated On 2022-08-24 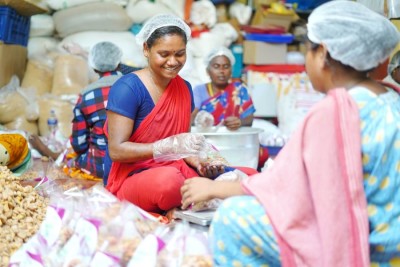 As soon as the banana chips and the sarkaravaratti (jaggery coated banana chips), which are currently delivered to the 56 depots of Supplyco will be exhausted, the remaining will be distributed from the Kudumbashree units. The products are manufactured and distributed through more than 300 Kudumbashree units functioning across the state. All the four units from the Scheduled Tribe Community of Attappady are also active in product manufacturing this time. The procurement of banana has been intensified to prepare products according to the quantities as per the contract. Currently, its procured from more than two and a half lakh Kudumbashree women farming groups (Joint Liability Groups-JLGs) as well as from the public market. The respective District Missions are responsible for co-ordinating the activities including product manufacturing and distribution.

Entrepreneurs will get Rs. 30.24 inclusive of GST per pack of 100 grams. Last year also, Kudumbashree has supplied products for including the onam kit of Supplyco last year as well. An order for supplying 41.17 lakh packets of chips and sarkaravaratti was received then. Through the distribution program in which 273 units participated, the entrepreneurs  made a sales of Rs.11.99 crores.

Minister said that Kudumbashree should become the force that determines the future of Kerala. Kudumbashree has evolved into an organization that can deliver the benefits of all the schemes implemented by the government to the real beneficiaries. The CDS Chairpersons should transform this organization into a force that plays a major role in social development. The Minister said. He also stated that in accordance with the increasing potential of the domestic market, quality products from the agricultural- microenterprise sector can be produced by utilizing science and technology.

The training is being organized in seven batches. There are 150 candidates in each batch including CDS chairpersons from all districts. The five day training programme aims at creating a sense of purpose to carry out day-to-day tasks and administration of Kudumbashree CDS in the most effective manner.