M.V. Govindan Master addresses the newly inducted Kudumbashree CDS Chairpersons during the valedictory function of the fourth batch of 'Chuvad 2022' training Updated On 2022-08-21

M.V. Govindan Master, Minister, Local Self Government Department and Excise Department, Government of Kerala addressed the newly inducted Kudumbashree CDS Chairpersons during the valedictory function of the fourth batch of 'Chuvad 2022' Residential training held at Agricultural Co-operative Staff Training Institute, Manvila, Thiruvananthapuram on 20 August 2022. He said that women should be able to move away from male dominance and be independent.

Women should be able to play a democratic role with men in the family system. It should also be recognized that household chores are valued. A remarkable movement was created in the society through the formation of the Auxiliary Groups in all the wards in the state comprising of educated women between the age of eighteen and forty.  Auxiliary Groups help to prevent and respond to violence against women and thereby increase Kudumbashree's intervention capacity in social issues. For women empowerment and equality to be possible, women must also be financially supported. For that, CDS chairpersons should understand the potential of their respective panchayats and make plans to start income-generating enterprises, including in the agro-industrial micro-enterprise sector. Kudumbashree should be able to produce quality products from all districts with attractive packaging and branding. The Minister said. He also added that the efforts to bring hundreds of popular products of Kudumbashree to the market for Onam season next year should be started immediately. 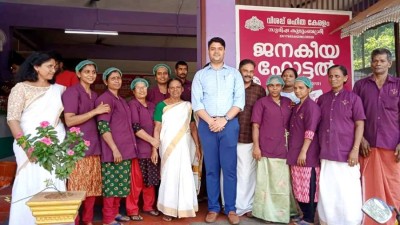 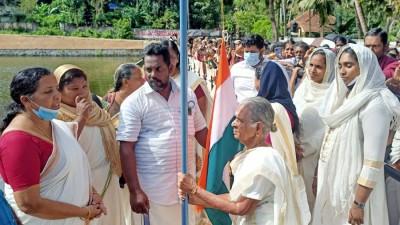 National flag was flown in 45 lakh NHG families as part of 'Har Ghar Tiranga' Campaign in connection with the 75th Independence Day Celebrations. Tricolor flags were hoisted in three lakh Kudumbashree neighborhood groups and 45 lakh women's families in the state. It was also a matter of pride that the Kudumbashree units stitched the national flags hoisted in the NHGs this time in connection with the Independence Day celebrations.

After the NHG meetings, the presidents of each NHG hoisted the national flag. Newly formed Auxiliary groups along with existing NHGs actively participated in the Independence Day celebrations organized by Kudumbashree CDSs in association with the respective local bodies. In addition to the mega quiz, elocution and painting competitions organized for Balasabha-Auxiliary Group members, Independence Day Pledge with the participation of 10,000 Balasabha members, cultural processions led by NHG-Auxiliary Group members were organized in the CDSs. Flag distribution to NHGs were done through Kudumbashree CDSs. These were made available from the respective local bodies. Kudumbashree CDS and ADS gave leadership to the NHG level programs. 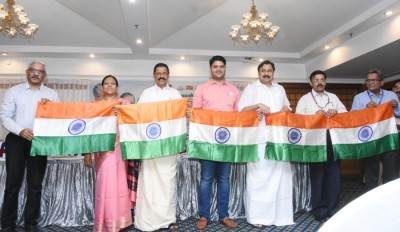 Shri. M.V. Govindan Master, Minister, Local Self Government Department and Excise Department, Government of Kerala and Shri V. Abdurahiman, Minister of Posts and Telegraphs, Government of Kerala received the nationals flag given by Kudumbashree and the Postal Department as part of the 'Har Ghar Tiranga' implemented by the Government of India to develop an emotional connection with the national flag to the citizens and to inspire national integration. Both the ministers were given the national flag at the ceremony of handing over the MoU for the new project jointly being implemented by Kudumbashree and the Postal Department. 'Har Ghar Tiranga' is the programme being implemented in connection with the 'Azadi Ka Amrit Mahotsav' which is part of the 75th anniversary of Indian Independence. 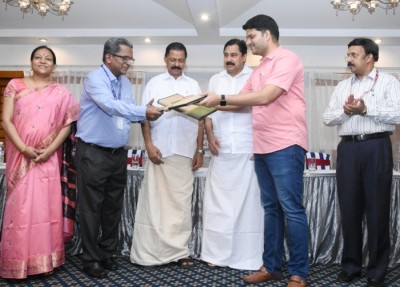 During the presiding speech, Shri. M.V. Govindan Master said that Kudumbashree has a strong network that can undertake any job assigned by the Postal Department as part of providing better service to the customers. As part of strengthening the livelihood sector, the new project implemented in collaboration with the postal department will create job opportunities for hundreds of women in the future, he said. Shri V. Abdurahiman, Minister of Post and Telegraph Department, Government of Kerala said that the new project is being implemented in collaboration with Kudumbashree as part of helping women to achieve equality and financial security. He said that the Postal Department will cooperate with Kudumbashree in all possible areas in the new projects under consideration.

"Women empowerment and gender equality is not only about the attire. We need equality between men and women. For that, it should be able to make the democracy work. To achieve equality, women need employment and income. CDS chairpersons should envisage activities keeping this goal in mind. Women should be provided with the necessary assistance to start locally unique enterprises in association with local self government institutions. Further efforts should be made to gain acceptance for these products in the global market with better marketing support". The Minister said. He also added that the government is thinking of providing necessary assistance to the auxiliary groups to start the business enterprises and he wished success to the new CDS chairpersons participating in the training program.

The training is being organized in seven batches. There will be 150 candidates in each batch. These will include CDS Presidents from all districts. The aim of the training program is to create a sense of purpose among them on how to engage and act in their daily duties and administration. The training of the fourth batch will start on 18 August 2022. Shri. Nishad C.C.,  State Program Manager, Kudumbashree welcomed the gathering and Smt. Sukumari, CDS Chairperson, Karakulam CDS extended the vote of thanks.

Kudumbashree Malappuram District team completed the order of 432 flags placed by Canara Bank on 27 July 2022. Thannikkal Vasthra Boutique Unit took up this and prepared the flags. Malappuram district has received total order of 1.92 lakh flags so far. The production of the flags is progressing through 94 enterprise units.

About 700 units of Kudumbashree are engaged in preparing and distributing flags to houses and institutions in the state as part of the 'Har Ghar Tiranga' (tricolor flags in every house) Campaign as part of the 75th Independence Day celebrations. 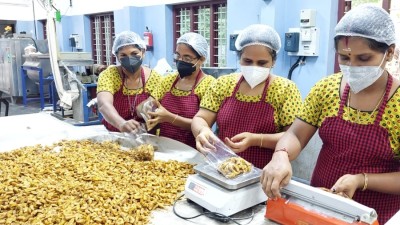 The entrepreneurs will get Rs. 30.24 inclusive of GST per 100 gm packet. The products are manufactured and distributed through more than 300 Kudumbashree units in the state. Kudumbashree aims to complete the supply of products as per the quantity mentioned in the contract by 20 August 2022.

The activities related to delivery of the products prepared by the Kudumbashree units to the 56 depots of Supplyco is progressing. Kudumbashree District Missions have been instructed to efficiently co-ordinate and carry out activities including production and distribution of products. The procurement of banana has been ramped up for preparing the products as per the requirement of Supplyco. This is procured from over two and a half lakh Kudumbashree JLGs (Joint Liability Groups) in the state and from the public market. Supplyco will pay directly to the entrepreneur's account as soon as the products are delivered to the depot.

Kudumbashree had supplied products to Supplyco for including in the Onam Kit last year as well. An order for supplying 41.17 lakh packets of banana chips and sarkaravaratti was received then. The entrepreneurs had made a sales of Rs. 11.99 crores, in which 273 Kudumbashree units participated. 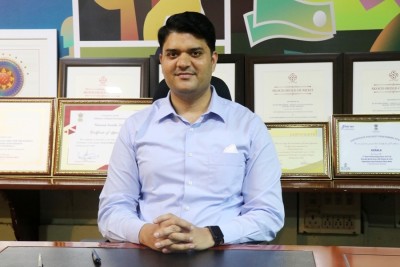 He is a 2013 batch IAS officer. Earlier, he has served as the District Collector of Malappuram, Managing Director of Roads and Bridges Development Corporation Kerala Limited, Chief Executive Officer of Cochin Smart Mission Limited, Chief Executive Officer of Kochi Metropolitan Transport Authority, Director of Social Justice Department and Additional Director General of Kerala Tourism Department. He is a native of Rajasthan. 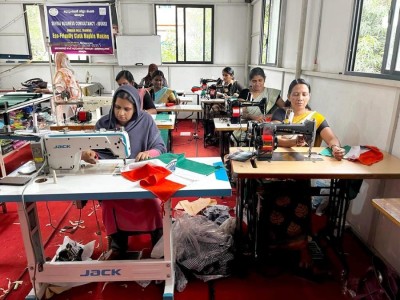 Kudumbashree is to manufacture 50 lakh National Flags as part of the 75th Anniversary Celebrations of Indian Independence. In connection with the 75th Independence Day celebrations, the national flag will be hoisted at all homes, educational institutions and governmental semi-governmental institutions in the state from 13 to15 August 2022. Kudumbashree is making and distributing fifty lakh national flags required for this purpose. As per this, around 4000 Kudumbashree members from about 700 sewing units under Kudumbashree have started manufacturing the national flags. The arrangements for manufacturing 28 lakh flags have been completed until now.