The Food and Safety Department has extended training for 120 Kudumbashree entrepreneurs working in the food production and processing sector of Thiruvananthapuram district. The training was conducted at Bhakshya Suraksha Bhavan, Thycaud, Thiruvananthapuram on 16 to 17 September 2022. Food Safety Training and Certification (FoSTaC) course of Food Safety and Standards Authority of India (FoSTaC) was organized for them. The training is organized as part of the 'Eat Right Challenge'. The classes were extended on various topics such as hygiene, packing and good practices to be followed in this field. 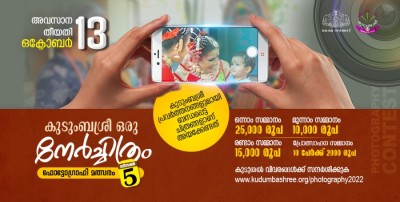 The jury, composed of renowned photographers and officials of Kudumbashree Mission will select the winner. The Award for the Best Photographer will be Rs. 25,000. The second prize and third prize will be Rs. 15,000 and Rs. 10,000 respectively. Rs. 2,000 each will be issued for 10 entries as consolation prizes.

Entries may be sent to the mail id, kudumbashreeprcontest@gmail.com or may be sent in CD Format or as hardcopies to the address, The Public Relations Officer, Kudumbashree State Mission Office, Trida Building, Medical college P.O, Thiruvananthapuram-695011. The name, address, mail id and contact number should be mentioned along with. A short note on the photograph should be attached along with. The photographs should not contain any watermarks. The entries should be transcribed as 'Kudumbashree Oru Nerchithram Photography Competition'. More details of the notification is available in the link : www.kudumbashree.org/photography2022.

The first season of ‘Kudumbashree or Nerchithram’ was conducted during November- December 2017 and the second season during February -March 2019. Whereas the third season was held during January- February 2020 and the fourth season of the competition was held from July-September 2021. The four seasons of 'Kudumbashree Oru Nerchithram' Photography Competition had resulted in a huge success. Good quality photographs portraying the strength of Kudumbashree, functioning focusing on women empowerment is considered for the ‘Kudumbashree Oru Nerchithram’ Photography Competition, which is being conducted from 2017 onwards. Kudumbashree Mission which envisions eradicating poverty through women in Kerala had successfully completed 24 revolutionary years and has entered into its silver jubilee year. 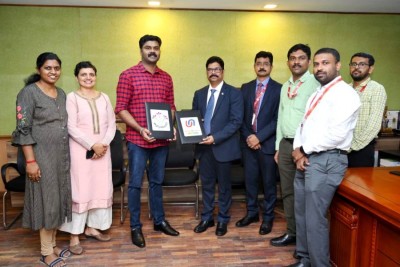 Kudumbashree has signed Memorandum of Understanding (MoU) with Union Bank for the disbursement of fast linkage loans to NHGs. Shri. Jafar Malik IAS, Executive Director, Kudumbashree and Shri. Raveendra Babu, General Manager, Union Bank signed the MoU in this regard.  The aim of the association is to provide loans to as many NHGs as possible. For this purpose, the banks will collect the information of the NHGs in need of loans from the respective District Mission offices and intensify the loan distribution programme. The bank will make relaxations in the existing procedures for opening new accounts and providing linkage loans to NHGs.

The branch authorities of the bank will directly collect the information of the eligible NHGs from Kudumbashree. For this, Kudumbashree will identify NHGs who have completed grading and are eligible for loans. Kudumbashree will also ensure the proper repayment of the NHGs after receiving the loan. Along with the quick access to the linkage loans, Union Bank will also take over existing loans from other banks and financial institutions for NHGs. This will be subject to the Bank's prescribed guidelines.

Kannur District Panchayath aimed at establishing five coffee kiosks in the district. Five Kudumbashree members will get employment in each unit. Rs. 2.8 lakhs per kiosk (total Rs 14 lakhs) is allocated under the District Panchayat Scheme. The additional amount is provided through Kudumbashree. The first coffee kiosk in the district was started at Padiyottuchal in Cherupuzha. Ms. Rani Reji, Ms. Gauri K.V., Ms. Ramya K.V., Ms. Bindu Cherian and Ms. Karthiyayani. K are the Kudumbashree members who got the opportunity to set up the kiosk. 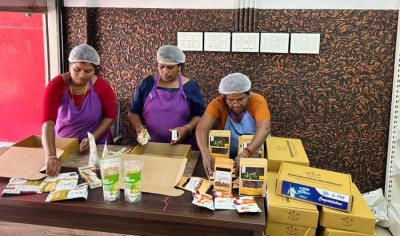 Lucky Bill Scheme is a scheme where customers can upload the bills they receive in any situation like receiving services, buying goods, eating food, paying room rent and win a prize through lucky draw. One can participate in the competition through the Lucky Bill mobile app. 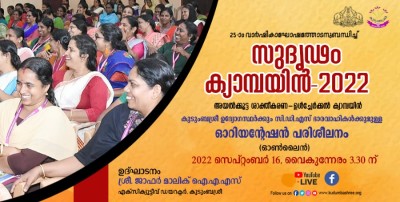 Kudumbashree has launched 'Sudrudam 2022' State Level Campaign as part of strengthening the Kudumbashree organizational system. The campaign aims to find and integrate those who are not yet the members of Kudumbashree and those who have left the NHG groups.1070 Community Development Societies (CDSs), 19,438 Area Development Societies (ADSs) and 3,06,551 Neighborhood Groups (NHGs) will become part of this campaign. Shri. Jafar Malik IAS, Executive Director, Kudumbashree explained the project at the meeting organized as part of the campaign, in which the officials of Kudumbashree State-District Missions and CDS Chairpersons participated.

The main activities of the two- week long campaign include formation of new NHGs, inclusion of newly entered and departed NHG members, activation of the inactive NHG groups and training of NHG groups on keeping accounts. Also special focus will be given to the coastal minority Scheduled Tribe areas and the full NHG entry will be ensured. Also, transgender, differently abled and elderly people will be identified and new NHGs will be formed for them. Special health camps will be organized for them and activities to ensure insurance coverage will also be initiated. The campaign activities will be carried out according to the local characteristics. A special mobile application will also be set up to monitor the activities.

The two-week long 'Sudrudam' campaign is being organized as part of the year-long programmes in connection with the Kudumbashree Silver Jubilee celebrations. Training for the CDSs will be organized on 19 September 2022 under the leadership of District Missions. After this, the activities to be carried out in connection with the campaign will be prepared under the leadership of the CDS Governing Body. The ADSs will organize the activities based on this. The State and District Missions will jointly co-ordinate campaign activities organized at the CDS, ADS and NHG level.

NRLM officials from Chhattisgarh, Jharkhand and Bihar makes study visit to get to know Kudumbashree Updated On 2022-09-17

Officials of National Rural Livelihood Mission from Chhattisgarh, Jharkhand and Bihar states made a study visit to get to know Kudumbashree. Representatives of Pradan, an NGO, also accompanied with the group. The team visited Kudumbashree State Mission office on 16 September 2022 and interacted with the officials in charge of various project activities and cleared doubts. Prior to that, during the two-day visit made to Ernakulam district, the team paid visits to Kudumbashree CDS Office, Nutrimix Unit, Gender Resource Centre, NHG, ADS meeting and KAASS auditing activities. It is on the third day of their study visit, they made the visit to Kudumbashree State Mission. 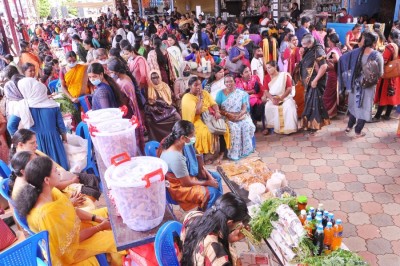 Sales of Rs. 18.94 crores has been recorded through Kudumbashree Onam Markets organized under the leadership of Kudumbashree across the state. This achievement was made through 1102 CDS Level Onam Markets organized in the 1070 CDSs. Rs. 14.13 crores was recorded from the sale of the products of micro enterprises and Rs. 4.81 crores from the sale of agricultural products. Kudumbashree entrepreneurs were benefitted out of this opportunity.

It is for the first time that Kudumbashree is making a huge sales from the onam market after the unprecedented floods and the crisis of covid-19. Rs. 9.67 crores was earned during last year and double of that amount is earned during this year. Ernakulam district has made the highest sale through Kudumbashree Onam Market during this year. The entrepreneurs of Ernakulam district was able to make a sales of Rs. 2.90 crores. Kozhikode district came in the second place by making a sales of Rs. 2.62 crores. Whereas Alappuzha district came in the third place with a sales of Rs. 2.52 crores.

This time, the onam markets were also notable with the excellent participation of the entrepreneurs. The CDS Level Onam Markets were organized under the leadership the respective District Missions in collaboration with the Local Self Government Institutions. 35,383 micro enterprise units and 17,475 Kudumbashree farming groups brought their products to the CDS Level Onam Markets. Apart from this, Kudumbashree products were also made available at the marketing fairs organized in collaboration with the local bodies, Agriculture Department and Supplyco departments. The good organization and efficient coordination along with availability of quality products at fair prices paved the way for the success of the Onam Markets.

Onam Market is one of the major sources of income for the Kudumbashree entrepreneurs working in the agricultural-micro enterprise sector. Though the color of the onam markets faded due to the covid recession during the last two years, Kudumbashree succeeded in activating the organization of onam markets in rural and urban CDSs, this time. The public market has also been buoyed this time as the threat of covid had faded. 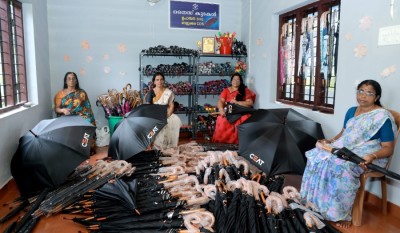 Kudumbashree  micro enterprise units from Thrissur district of Kerala received work order for umbrellas worth Rs. 3 Lakhs from CEAT Tyre Company. The 'Friends Umbrella Manufacturing Unit' of Nenmanikkara Panchayath and 'Nice Umbrella Manufacturing Unit' of Velukkara Panchayath of Thrissur are the two units who received the order for umbrellas. Both the units have received an order worth Rs. 3 lakhs to manufacture and supply 1000 wooden umbrellas.

The company officials inquired with Kudumbashree Thrissur District Mission whether they could prepare and provide umbrellas with logo printed on them in the specified pattern. Following that, Kudumbashree District Mission decided to distribute the umbrella order to the 'Friends' and Nice' Umbrella units. The two units that carried out umbrella manufacturing completed the order on time and supplied the umbrellas to the center at Thrippunithura, Ernakulam. This onam was indeed an unforgettable one for the members of Friends Umbrella Manufacturing Unit' and 'Nice Umbrella Manufacturing Unit'.

Kudumbashree served delicious food to the viewers who came to watch the 68th edition of Nehru Trophy Boat Race held at Alappuzha on 4 September 2022. In the food fair organized by two enterprise units, delicious dishes like tapioca, fish curry, shellfish, biryani, tea, coffee, ilayada and samosas were served. The food stalls were set up at the entrance of the finishing point and at the entrance of Nehru Pavilion. Subhiksha Micro Enterprise unit from Alappuzha Municipal CDS and Anugraha micro enterprise unit from Muhamma Grama Panchayath CDS were the two units who served delicious food to those who came to watch Nehru Trophy Boat Race. The units were able to make a sales of Rs. 1,42,650 including coupons through the food fair.