The 'Woman' Film Fest' opens up an opportunity for thousands of NHG members to immerse themselves in the magical world of films that have created wonder in the hearts of people like Children of Heaven, Heidi, Village Rockstar and discover new levels of enjoyment. The Film Fest is organized in collaboration with the Kerala State Chalachitra Academy, Government of Kerala. The film screenings as part of the film festival are being held for a period of three months starting from July 2022 to September 2022 in 81 CDSs of Kannur district. The Film Festival also aims at introducing films that have gained national and international attention to the inner villages.

The cinema screening in a CDS is from 10 AM to 5 PM, on a fixed day. The exhibition space will be determined according to the availability of school and panchayat auditoriums. It will be coordinated in such a way that upto 150 people can watch the movie at a time. Films such as Basanti, Freedom Fight, The Great Indian Kitchen, Manhole, Ottamuri Velicham and Ozhimuri will be screened at the festival. All NHG members and auxiliary group members can be a part of the film festival organized under the leadership of the CDS.

An opportunity for Kudumbashree women to participate in the entrepreneurship training program jointly conducted by the National Commission for Women and the Indian Institute of Management (IIM) Kozhikode for free. Existing Kudumbashree entrepreneurs and those who are interested in starting enterprises can participate in this online training. The pedagogy will include lectures, discussions, entrepreneurship talks, and significant mentoring from various subject matter experts.

Foundation training will be provided to those interested in starting enterprises and advance training to existing entrepreneurs. The Foundation Program in Entrepreneurship is designed for women who want to enter the entrepreneurial arena. It will aim to develop the entrepreneurial skills required to identify a business opportunity and set up a business and the managerial capability to run the enterprise successfully. The Advanced Program in Entrepreneurship is designed for women entrepreneurs who want to scale up their businesses. It will aim to augment their entrepreneurial skills in finetuning their business model, expanding their markets, accessing funds, and diversifying their product or services. In addition, the program will help enhance their managerial capability to run the enterprise. Those who successfully complete the training will receive a certificate.

Kudumbashree excels at Mussoorie Updated On 2022-06-28 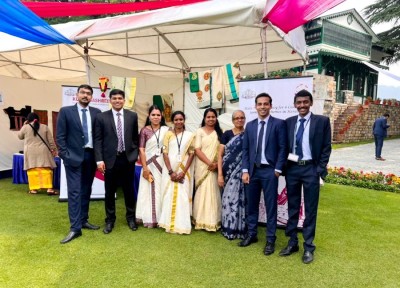 Kudumbashree becomes a star in the marketing fair held at the Lal Bahadur Shastri National Academy of Administration (LBSNAA) in Mussoorie. About sixteen products including Kerala sarees, dhotis and handicrafts were brought by Kudumbashree for sale at the fair organized at the IAS Academy from 26-27June 2022.

In addition to their participation in the marketing fair, they also interacted with the civil service trainees on the activities including enterprise formation of Kudumbashree focusing on NHGs (Neighborhood Groups). The products of the entrepreneurs from Thrissur and Palakkad districts were made available at the fair. 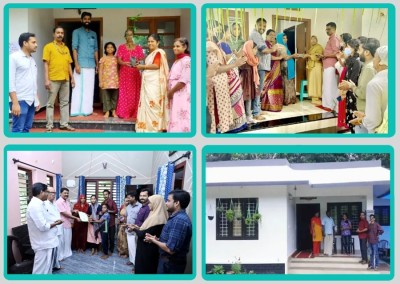 The Pradhan Mantri Awas Yojana - Urban [PMAY-(U)] Project, which has colored the dreams of the common people to have a safe and secure home to live, completed seven golden years on 25 June 2022. The PMAY (U) project was launched in Kerala in 2015 through Kudumbashree. The scheme is being implemented in 93 Urban Local Bodies in the state converging with the LIFE Mission since 2017. On the occasion of the seventh anniversary, the elected representatives, municipal officials and project officials visited the houses of the beneficiaries and interacted with them. 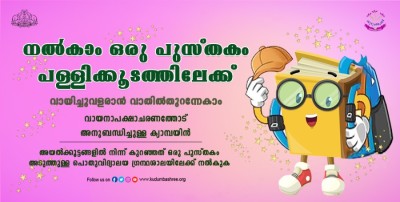 Kudumbashree's 'Nalkam Oru Pusthakam Pallikkoodathilekku' (Donate a book to School) Campaign has been started. The campaign aims at donating one book from every NHGs to the libraries of the nearby public schools and thereby make an opportunity for the intellectual growth of the younger generation.

The campaign is being organized as part of the Reading Week Observance started on 19 June 2022. The NHGs may jointly buy/ collect a book and donate to the nearby public school. They can donate more than one book as part of this campaign. These activities are also carried out in various offices of Kudumbashree. 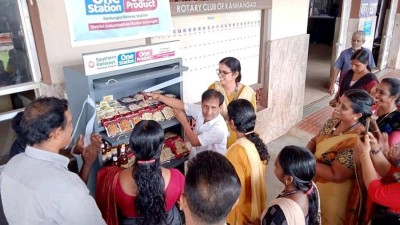 Now the travelers will have the opportunity to acquire the leading 'Saphalam' cashew and 'Jeeva' honey during their train journey. A sales person each has been deployed at the stalls where various products of Saphalam Cashew Unit of Chemmanad and the Jeeva Honey Unit of West Eleri Grama Panchayat are available. Kudumbashree Kasaragod District Mission aims to set up similar stalls at other railway stations in the district viz., Kumbla, Uppala, Ullal, Manjeshwar, Kottikkulam and Bekal in the future as part of the project.

A Career Guidance Workshop was organized at Attappady for the tribal students who have written and passed the tenth and higher secondary examinations in the year 2022, at the Conference Hall, KILA, Agali on 22 June 2022. The Workshop was organized as part of the Attappady Comprehensive Tribal Development and Particularly Vulnerable Tribal Group Development Project, in association with the Chittoor Career Development Centre under the Employment Exchange.

560 people participated in the workshop which was organized with the objective of giving a clear direction to the children of the Scheduled Tribes community for higher education and job opportunities. The team guided by Ms. Hema, Employment Officer and Centre Manager, Chittoor Career Development Centre, led the classes. Mr. V.S. Muhammad Ibrahim, Former Director, Backward Classes Welfare Department, Government of Kerala explained about the possibilities of higher education to the children.

The workshop explained the various courses that students can choose from after tenth and higher secondary classes and the job opportunities of these courses. Animators, Tribal Promoters and Bridge Course teachers collected information from students through the Kudumbashree Panchayat Committees in Attappady. Mr. B.S. Manoj, Assistant Project Officer, Attappady Comprehensive Tribal Development and Particularly Vulnerable Tribal Group Development Project presided over the function. 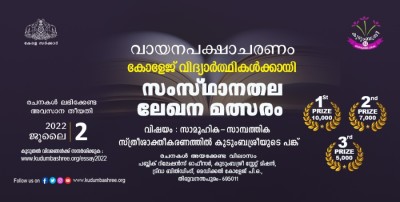 Kudumbashree is conducting State Level Essay Competition for College Students on 'The Role of Kudumbashree in Social, Economic and Women Empowerment' as part of the Reading Week Celebrations. The first, second and third place winners will be awarded cash prizes of Rs 10,000, Rs 7,000 and Rs 5,000 respectively.

The essay should use only a maximum of two thousand words. The entries should be sent by post or courier along with the name, address, phone number and the certificate of Principal / Head of the Department to 'The Public Relations Officer, Kudumbashree State Poverty Eradication Mission, Second Floor, TRIDA Rehabilitation Building, Medical College P.O., Thiruvananthapuram-695 011.

1. The essay should not exceed more than two thousand words.
2. The students who are participating should send their entries along with their name, name of the college, topic, address, phone number and certificate from the Principal / Head of the Department.
3. Children / family members of Kudumbashree State- District Mission employees are not eligible to participate in the competition.
4. The decision of the judges regarding the competition will be final.
5. Do not write the name or other details of the student on the entry.
6. The entries should be sent by post or courier.
7. Entries submitted through WhatsApp will not be considered for the competition.
8. The last date for receipt of articles is 2 July 2022. 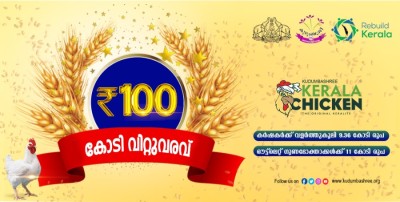 'Kerala Chicken', the project conceptualized and launched by the Government of Kerala to ensure the market of good quality chicken at affordable rates all across the state is being a hit among the public. The sales through Kerala Chicken outlets has already crossed Rs.100 crores. The project which was started during November 2017, is being implemented through Kudumbashree in 6 districts.

Until now, sales of Rs. 100,09,29,097.52 has been recorded. 270 farms and 94 Kerala Chicken marketing outlets are functioning in 6 districts viz., Thiruvananthapuram, Kollam, Kottayam, Ernakulam, Thrissur and Kozhikode. Through Kerala Chicken, Kudumbashree was able to provide Rs. 9.36 crores to farm beneficiaries as farm allowance and Rs.11 crores to outlet beneficiaries. 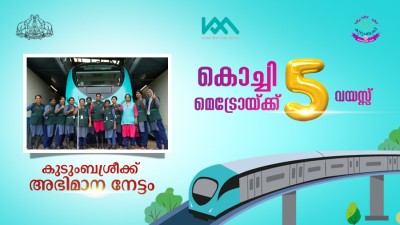 Kudumbashree NHG members or Kudumbashree family members have been performing their duties of ticketing, customer facilitation, housekeeping and gardening in the best possible manner for the last five years at Kochi Metro. It has also been able to provide various employment opportunities for transgender people as well. The activities of Kochi Metro are coordinated through Kudumbashree Facility Management Centre. At present 613 persons are doing various jobs in Kochi Metro through Kudumbashree Facility Management Centre. 9 of them belong to the transgender community. There are 14 male members of the Kudumbashree family working in the multi-task services sector.