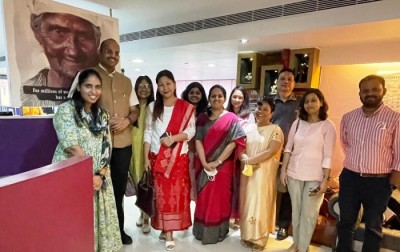 Smt. P.I. Sreevidya IAS, Executive Director, Kudumbashree had made a presentation to the team about the involvement of Kudumbashree community structure in the Amrutham Nutrimix- the food supplement prepared by the community for children of the age group of 6 months to 3 years, supplied through Anganwadi in convergence with ICDS (Integrated Child Development Scheme), Santhwanam – the health intervention of Kudumbashree to complement the health services of Government of Kerala, and the Ward level health and sanitation committees in the Gram Panchayats. Kudumbashree also offered Meghalaya the needed support in similar community-led interventions using the National Rural Livelihood Mission- Self Help Group (NRLM-SHG) network in the area of health and nutrition. Kudumbashree already has a partnership with Meghalaya for implementing the PRI-CBO (Panchayati Raj Institutions- Community Based Organisations) Convergence project.

The presentation had also covered the work undertaken by Kudumbashree NRO along with Meghalaya SRLM in conducting health camps, activating the Anganwadi level monitoring & support committee and also the initiatives in setting up nutri gardens in Meghalaya. After the meeting, the Meghalaya Delegation made a two day field visit at Kollam and Ernakulam field districts. 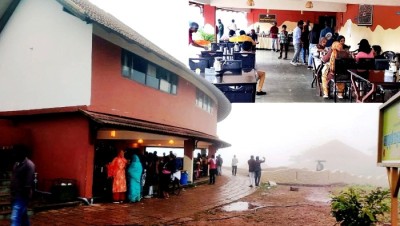 Kudumbashree's 'Gothrashree' Tribal Cafeteria has become the focal point of 'Ente Ooru' Tribal Heritage Village, set up by the State Government at Pookode in Wayanad to give tourists a first-hand experience of tribal culture. The Heritage Village Project aims at introducing the unique heritage, way of life, rituals and arts of the tribal people of the district to the outside world and thereby provide them with a better livelihood. The Heritage Village is set on 25 acres of land in Kunnathidavaka village of Vythiri taluk.

Kudumbashree 'Gothrashree Cafeteria' is run by a group of specially trained tribal youth. There are 12 people in the group, including a young woman. Along with the unique dishes of Wayanad, meals, Vanasundari Special Chicken, various leafy vegetable curries, Puzhukku (dish made of boiled / steamed root vegetables flavored with seasoned coconut paste), Kumbalappam (steamed cone cake) etc are available at the Gothrashree Cafeteria. And in ten days, the Gothrashree entrepreneurs have earned an income of Rs 2.5 lakhs.

In addition to the 'Gothrashree' Cafeteria, there are three other Kudumbashree enterprises in the Heritage Village viz., Gothrashree Agricultural Nursery, Gothrashree Medicinal Nursery, and Gothrashree Food Processing Unit, which manufactures and markets various products such as spices, pickles and coffee powder.

Ms. Anna Shotbolt, British Deputy High Commissioner came to get acquainted with the women empowerment and poverty eradication activities being implemented in the state through Kudumbashree. She visited the Karuna Fitness Centre, a Kudumbashree Micro Enterprise functioning in Kazhakoottam Pallippuram ward of Thiruvananthapuram district of Kerala on 7 June 2022. This was her first visit to Kudumbashree, as the British Deputy High Commissioner in charge of Kerala and Karnataka states.

Karuna Fitness Training Centre which functions in the Pallipuram Ward of CDS 1, Thiruvananthapuram Corporation is an enterprise launched as part of the National Urban Livelihood Mission (NULM) being implemented by Kudumbashree in the state. The enterprise is run by Smt. Sandhya, Smt. Valsala, Smt. Deepa and Smt. Sajitha, the members of Mahalakshmi NHG.

The British Deputy High Commissioner and his team arrived at the unit and met the Kudumbashree micro entrepreneurs and Kudumbashree officials. In the ensuing meeting, Smt. P.I. Sreevidya, Executive Director, Kudumbashree explained the major projects being implemented by Kudumbashree in the state, including the livelihood and social security sectors. Following that, Ms. Anna Shotbolt also spoke with entrepreneurs, Smt. Sindhu Sasi, CDS Chairperson, Smt. Deepa Harinarayanan, Community Organizer, NULM, Smt. Ajitha L, ADS Secretary and Smt. Lekha Kumari, Member Secretary. She asked the entrepreneurs about the method of working of the Fitness Training Centre and what motivated them to start the venture. She also discussed about the role of CDS Chairperson.

Ms. Anna Shotbolt expressed satisfaction with the diversity of the programmes implemented by Kudumbashree in the livelihood sector and the activities of BUDS institutions in the field of social security. She was also impressed by the actions of NHG women, who rallied with a social commitment in surviving the natural disasters and the covid crisis. The socio-economic women empowerment activities, programmes and the activities of Kudumbashree National Resource Organization in other States were also explained to her. She said that the way in which women are democratically elected in the Kudumbashree three-tier organizational system and their progress and visibility in the political and social spheres is really commendable. 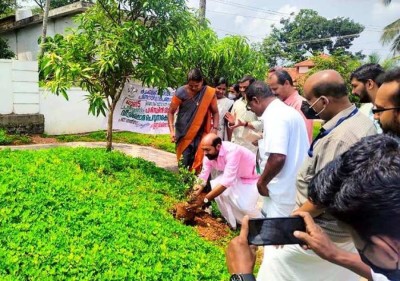 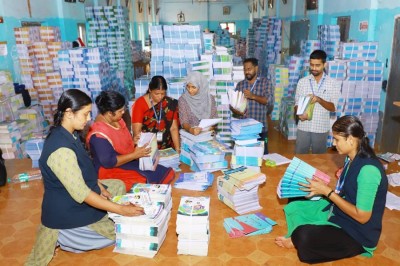 Kudumbashree members from all across the state were active in textbook distribution. As the children were back to the offline classes at schools after the crisis of Covid-19 pandemic, Kudumbashree members played an important role in ensuring that, the textbooks will reach them on time. Kudumbashree coordinated these activities along with the Education Department and KBPS (Kerala Books and Publications Society). 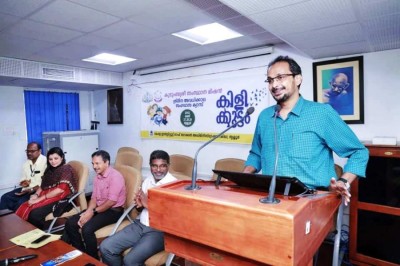 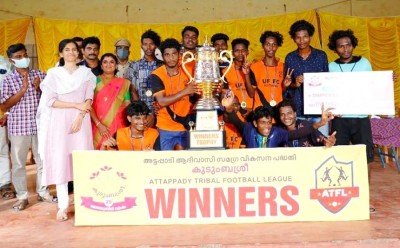 UFC Pottikkal become the winner of the first season of Attappady Tribal Football League. They had defeated FC Anavai in penalty shootout by 5-4. Ms. Mrinmayi Joshi, District Collector, Palakkad distributed the Award comprising of trophy, medal and cash prize of Rs 5000 to the first place winners, at the valedictory function. New Millennium Club came in the second place and received a trophy and a cash award of Rs 3,000. Whereas, Anashwara FC Abbannoor came in the third place and received a cash prize of Rs 2,000. The finals were held at the Agali Panchayat Ground on 25 May 2022.

Football is a sport that is very popular among the younger generation of Attappady. Although the tribal youth of Attappady have a lot of great sports talent, there is little platform for them to showcase and nurture it. Realizing that, Attappady Comprehensive Tribal Development and Particularly Vulnerable Tribal Group Development Project organized football matches under the name of ‘Attappady Tribal Football League’ for the tribal youth with the objective of nurturing the physical abilities of the youth in Attappady and to keep them free from the grip of intoxication and alcoholism. It is for the first time a Football League Competition was organized for the tribal youth of Attappady. The main objective of the activity was to nurture the athletic abilities of the youth, as opportunities like these will help to find the best sports talents through such competitions and to publicize the football prowess of Attappady all over Kerala.

Awards were also given for the Best Player in the Football League, the Best Player in the Final, the Best Goalkeeper, the Best Defender, the player who scored the maximum number of goals and the Emerging Player of the League. Those awards were distributed jointly by the District Collector, Palakkad and the elected representatives. Smt. Maruthi Murugan, President, Attappady Block Panchayath, Presidents and Secretaries of the Panchayath Samithi of Attappady Comprehensive Tribal Development and Particularly Vulnerable Tribal Group Development Project and other department officials also took part in the function.

'Venal Paravakal' Summer Camp was organized at Attappady as part of the Attappady Comprehensive Tribal Development and Particularly Vulnerable Tribal Group Development Project under the leadership of Child Resource Centre for tribal children.

The classes were led by Shri.Nikhil, Smt. Josna and Shri. Arun Chandran on topics such as art of communication, leadership and 'Pazhamayude Paatukal' (songs of the olden times).  Elected representatives, Panchayath Committee, office bearers of the Ooru samithi and Kudumbashree members took part in the programme. 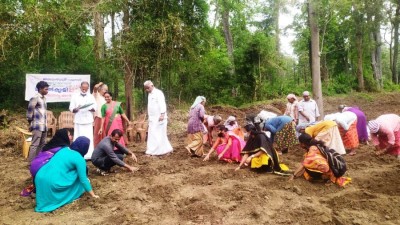 'Noorang' Programme has been started at Thirunelly Panchayath of Wayanad district of Kerala. The programme has been started at the Irumbupalam hamlet of Thirunelly Panchayath as part of the Thirunelly Tribal Special Intervention Programme. Tuber varieties were planted at the Irumbupalam hamlet as part of the Noorang programme on 10 May 2022. The tuber cultivation aims at preserving the tuber crops, production and distribution of seeds and giving awareness about tuber crops to the newer generation. The tuber cultivation is being done as part of the Noorang Programme. More than 300 varieties of tuber crops are being cultivated. 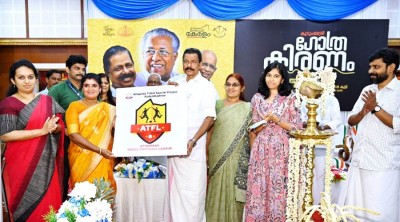 Kudumbashree has launched Attappady Tribal Football League to give the tribal youth of Attappady, the opportunity to prove their football skills. The Sevens Football League as part of the Attappady Comprehensive Tribal Development and Particularly Vulnerable Tribal Group Development Project was kicked off on 23 May 2022. The competitions were held at Panchayath Ground, Agali. The final match will be held on 25 May 2022.